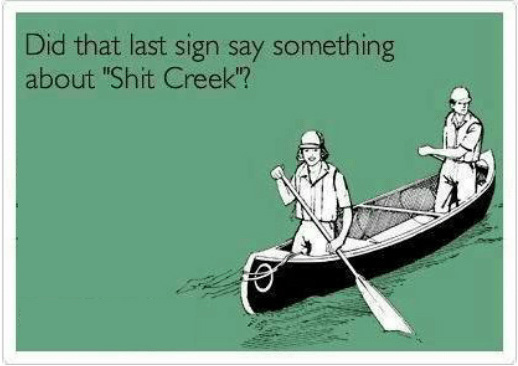 Taking stock at the beginning of a new year, I have to admit that 2017 was largely shit! No really, it was! This is not something I’m particularly proud of I can tell you. It felt like I was mired in miasma of misery and mental fatigue and couldn’t fight my way clear. In fact, I was languishing in (at?) Shit Creek.

It has to be said, Shit Creek is a place with which I have had some familiarity at other times in my life so you’d think I’d be able to recognise the warning signs and take evasive action. But no, it’s the same story every time. There I am, enjoying a leisurely paddle in my trusty (metaphorical) canoe along some tranquil, pristine waterway, full of hope and anticipation about where it will take me. Somewhere along the way, without me realising it, I’ve unaccountably veered off course up a tributary that looks superficially just like the main river itself. But the previously crystal clear water sliding past the canoe has inexplicably morphed into a brackish morass and it becomes progressively harder to keep making way. Despite all the growing evidence of imminent disaster, I struggle on determinedly until I’m irredeemably bogged down with nothing but the brown stuff to be seen in every direction. And where the hell did my paddle go?

It’s not as if anyone thinks,‘what do I want to do today? I know, I’ll paddle upstream to Shit Creek for a bit of a nosy around, drink in the aroma, have a relaxing slurry bath and head home for a well-deserved shower.’ Well, you don’t do you? You make what seems like a great decision or series of decisions, and it’s not till later you realise they were actually crap (sic) choices that should have been avoided like dog poop on a walking trail because your gut was shrieking ‘don’t do it, don’t do it!’ Yet, you pursue logic at the expense of your strongest instincts and oops, there you are back in it up to your gills. Or, to follow the analogy, trying to scrape it off your shoe with a stick. Merde alors!

We’re taught that logic trumps (in the card playing sense rather than the bozo in chief one) everything else. Societal conditioning in this regard is very strong and accepted wisdom is deeply engrained. After all, it stands to reason that basing critical decisions on analysis of  facts and figures should offer a better steer for decision making than relying on intuition and inner truths with their overtones of new age woo woo. And yet … that amazing warm glow when you make a choice that just feels innately right. The antithetic dread when you decide to do something that tears at ‘your truth’, to paraphrase Oprah at the Globes last week.

So at the beginning of another year, I am mindful of the definition of insanity — doing the same thing repeatedly and expecting a different outcome. I’m all for going with my inner truth. Facts and figures, probabilities and statistics, logic and rational thinking will always be part of the deal in terms of making decisions. They have to be, because they are important. But of equal importance is how I actually feel about the decision under consideration. In future, where logic and intuition are at war with each other, I’ll give the casting vote to intuition — after all, intuition’s much more likely to have my has my best interests at heart and, let’s face it, logic hasn’t entirely delivered. If I do this, I’ll be swooshing happily downstream — going with the flow as it were — instead of fighting my way against the current and landing back where I started; pooped and bewildered in the waiting room for the next Shit Creek Express.

Thanks for the image to http://illegaleldredtwplanduse.blogspot.co.nz/2017/