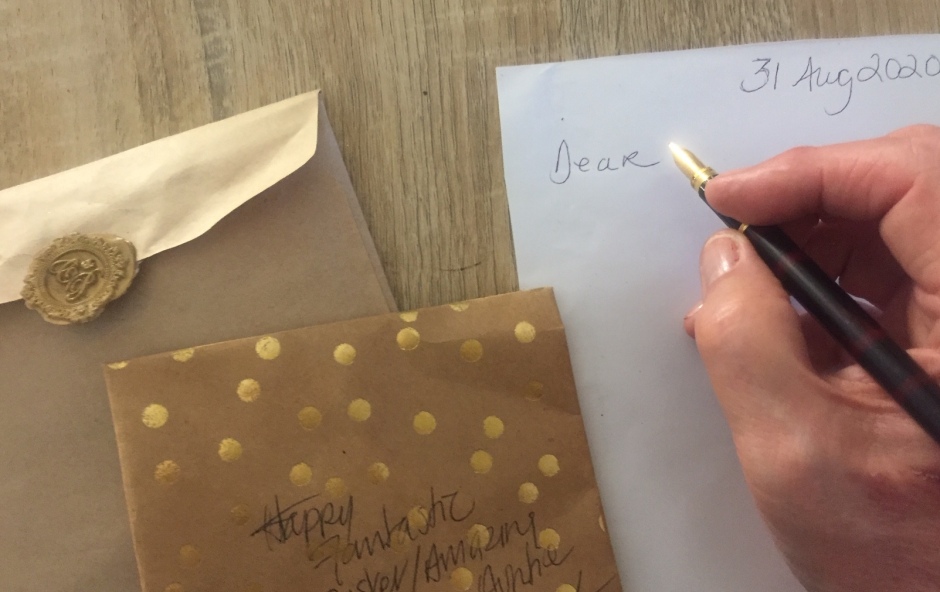 I nearly wrote a letter last weekend. What? Yes … an honest to God, old fashioned paper-based communication intended for distribution by snail. In the event, I didn’t. The digital habits of a fair chunk of my lifetime got in the way and I sent an email instead.

The impulse was triggered by reading that a lot of teenagers, missing their mates during the lockdown, re-discovered the joy of sending and receiving hand-written notes. In the isolation of their homes, apparently many found letters to be more intimate and emotionally connecting than texting, ‘social’ media posting and similar. Thinking about it unlocked the ghost of letters past that’s clearly still lurking inside me, and the memory of how much I used to enjoy getting mail. This chain reaction concluded in my close encounter with a blank page.

The article transported me back to the heart-lifting discovery of a hand-written letter nestling seductively in one’s letterbox. Then the ritual of finding the right place to read it; a secluded place under a tree, curled up in a big squishy chair in front of a roaring fire, or even a sweet scented, candlelit bath. The setting depended on the relationship with the sender — family, friend, lover, admirer — and the season. There was always that gorgeous moment of holding back, of prolonging the anticipation before finally ripping into the letter. Often there would be a quick scan of the contents for anything scary or sensational, before settling into a leisurely read through.

Good letters take time to craft. The best are intimate and personal. From soul to soul. As the words gather momentum they open avenues to the unburdening of our hopes and fears, loves and hates, joys and sorrows and the feeling of connection as we share the minutiae of our days. There’s something about the flow of a pen over paper that is missing altogether from keyboard bashing. Lacking a delete button, there was a need for precision and coherence of thought. Although the growing pile of screwed up paper as errors or uncertain confidences were cast aside spoke volumes on that score. There was an almost hedonistic pleasure in the first the first stroke of a fountain pen on a blank sheet of high quality paper. Or the challenge of writing in tiny letters to pack as much as possible onto those impossibly small pre-paid airmail letters that you folded up and licked the tabs on the edge which stuck it all together. You were lucky if you managed to do this without acquiring a paper cut on your tongue. ‘Nanny state’ would probably have something to say about that these days.

Sorry planet — I know how wasteful and unnecessary this feels now in this device-laden era where resources are diminishing as fast as pack ice in the Arctic and the tyranny of air miles is never far from our minds. But email just doesn’t hack it as a substitute for a neatly tied bundle of letters from a loved one or a box full of the most memorable greetings cards. I still have swags of each. Even if you print emails, they just don’t have the same bang for buck.

I’m a bit worn out by life in the ‘fast lane’. Living through the lockdown has seemingly awakened a sleeping dragon in many of us — the surprising seductiveness of slow. A nostalgia for bygone pleasures: the allure of a trip to a library; being literally lost in a good book; sitting down with friends and family over a leisurely and carefully crafted meal rather than shovelling in some hastily acquired takeaway or ‘dashboard dining’ option. Most of all, there’s all too little of the ultimate luxury; reflective time, something that is considered to be essential to our health and wellbeing.

This morning, I woke up with the poem Leisure by W H Davies rattling around in my head. Although I learned this ‘by heart’ at primary school, it’s meaning pretty much passed me by as a ten-year-old, but it resonates strongly now. I’m sure my teacher would have been highly gratified! The poem was published in 1911. In the opening lines, the poet asks, “What is this life, if, full of care, we have no time to stand and stare?” The thrust of the poem is that the hectic pace of modern life has a detrimental effect on the human spirit because there’s no time to appreciate the glory of the natural world around us. (Read Poem).

Willian Henry Davies was a Welsh poet and writer who grew up in a highly dysfunctional (though not poor), family. He dropped out and spent a significant part of his early life as a homeless drifter on both sides of the Atlantic. The Autobiography of a Super-Tramp, published in 1908, is about Davies’ life in the US between 1893 and 1899. Apparently, he crossed the Atlantic at least seven times during this period, working his passage on cattle ships, then travelling through many of the states, sometimes begging, sometimes taking seasonal work, often spending any savings on drinking binges with fellow travellers. They didn’t teach us this in school by the way — we might have paid more attention if we’d know a bit more about his colourful life. It would likely have seemed pretty romantic to the impressionable kids we were. Davies became one of the most popular poets of his time by drawing on his observations about life’s hardships, the ways in which the human condition is reflected in nature, his tramping adventures and the characters he met.

It has to be said, I lust after ‘slow’ until I remember what life was like without the convenience of Google as an information source, without which Mr. Davies would have remained an enigma to me. In all seriousness, I wouldn’t go back to the pre-Internet/digital era. There’s just too much that is genuinely better about now. But I do hope that we can hold on to some of the specialness of slow as we move on through this pandemic. To have time to see and enjoy the moment, to revel in our lives and in nature and the endless possibilities on offer. To take the time to share our dreams and disappointments with loved ones by whatever means are to hand, snail or otherwise. To have the luxury to simply stand and stare and understand how infinitely precious it all is … and how easily lost.