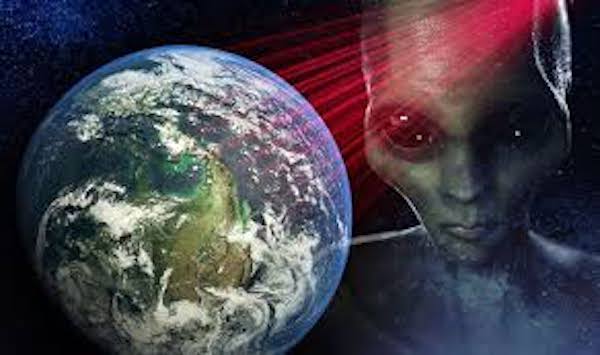 I just read a wonderful hypothesis outlining a genius way of mitigating the threat of global warming. The hypothesis is that we need to invent a new and super-scary existential threat — like aliens threatening to annihilate the world if we don’t instantly come up with a convincing plan for drastically cutting emissions. Think about it for a moment, it’s a perfect concept!

The central tenet of this inspired piece of thinking is that we need a total “re-imagining” of the world political order. That business as usual just won’t cut it if we are to do enough, quickly enough. While that’s not exactly visionary — I could have come up with that bit — I wouldn’t in my wildest dreams have imagined inventing a threat from some green-minded ETs to get us fully focussed on the important stuff.  As far as I am aware, this let’s pretend it’s aliensthat are causing all the problems thing is genuine blue sky thinking by NY Times OpEd writer Farhad Manjoo.

But why on earth (pun intended) would we do that?  Well, according to the marvellously creative Mr. Manjoo, our current reality of fake news, alternative facts and outright, barefaced lying opens the door to bending the truth for the greater good. Let’s face it, playing ‘let’s pretend’ for something of paramount importance would be a refreshing take on the now seemingly acceptable art of the untruth.

In Manjoo’s Wag the Dog scenario (by the way if you haven’t seen this marvellous Hoffman/De Niro black comedy about a spin doctor and a Hollywood producer who fabricate a war to distract voters from a presidential sex scandal, you really should — it’s hilarious) the threat of an alien invasion is the lever to get humanity off its collective arse and working together to save it’s collective bacon. Imagine if you will, the world receives a tweet from the alien leader “We will boil your planet alive. Only a carefully designed plan for cutting and capturing emissions will save you now, suckers!” It might be a bit of a stretch that said alien leader has such a good command of the English vernacular. Maybe she was equipped with one of those Babel Fish so useful to travellers in Hitchhiker’s Guide to the Galaxy? You know the ones, when played in your ear, these clever fish will live there and translate any form of language for you. Yup, I believe everything I read.

All joking aside, we humans have always been stellar at responding to external threats. We’re not so flash at changing our own behaviours, particularly if it means trading off some of our comforts and taking decisions that will hit our wallets. But seeing off a threat from potentially “murderous aliens” to save the planet might just galvanise us.As Manjoo says, “Even for people who do believe in global warming, pretending that aliens are attacking the earth accomplishes a neat mental trick. It helps to frame the scope of the threat — civilizational, planet-encompassing — while also suggesting how we might respond: immediately, collectively and for as long as it takes.”

And it could work! All you have to do is consider the hysteria that broke out in the US on October 30, 1938, when a 62-minute radio dramatisationof The War of the Worlds, by H.G. Wells (confusingly produced and narrated by Orson Welles) was broadcast. Apparently even people who had never heard Welles reading the HG Wells story about invading Martians wielding deadly heat-rays later claimed to have been terrified. Welles used simulated on-the-scene radio reports ostensibly by the military and air force about aliens advancing on New York City to pep up the story. According to popular myth, thousands of New Yorkers fled their homes in panic, with swarms of terrified citizens crowding the streets in different American cities to catch a glimpse of a “real space battle”. While this over-reaction has lately been outed as largely urban myth it’s not hard to imagine something similar happening in our current reality. I’m thinking about the arsenals of special effects available to film makers that could achieve genuine mass hysteria and harness it for good. Sadly, it’s also totally imaginable that we could harness it for worse, but let’s give humanity the benefit of the doubt here and assume we’d do the right thing.

OK so this is just fantasy, but it’s the most engaging solution I’ve read so far. Let’s face it, if we hit or exceed two degrees further warming, the scale of potential devastation will be catastrophic. This is not something even progressive governments can tackle in isolation, however well-meaning. Mitigating climate change is no longer just one item on a governmental ‘to do’ list. If we don’t act now, it will become the only thing that matters a damn. The build a wall thinking, the isolationist ‘dwarfs are for dwarfs’ ignorance imaged in C S Lewis’s Narnia finale The Last Battleunderpinning MAGA and, slightly differently, BREXIT, will be patent nonsense in the face of what is to come. Go aliens — pretend or otherwise — save us from ourselves.

P.S. Farhad Manjoo’s articleis entertaining and (by my way of thinking) totally on the money if you have a few minutes to spare.