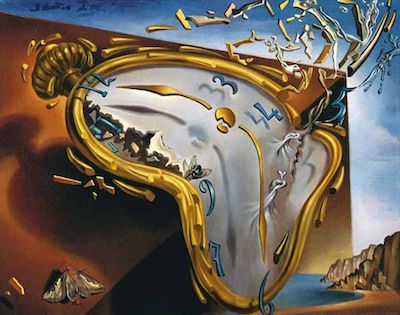 Sometimes I feel that my life is shrinking before my eyes. I’m nearly sixty — how on earth did that happen? I don’t feel old and we live in the world where 60 is the new forty don’t we? So, clearly I’m not. In any case, my soul or whatever you want to call the internal entity that feels like some sort of mini-me remains obstinately and happily oblivious to the passing of the years. Seems there’s a reason why they’re referred to as our ‘inner children’! I think of mine as my inner-Barbie because — like Peter Pan, she seems to inhabit some sort of Neverland where she is forever young. However, unlike the redoubtable Pan who remained a child, my Barbie seems to have cleverly arrested her growth at that beguiling mid-thirties stage. That wonderful place where chronology hasn’t yet won, the body is still beautiful and the spirit is beyond the myopic self-obsession of earlier ages and stages.

Just for the record, I do know I’m not stuck in a time warp circa 1995. I kind of get that every time I’m called to the dark side and consider buying a pair of flat shoes. (Instead of the gorgeously impractical and increasingly hard to walk in high-heeled varieties I have been seduced by all my life.) In recent years two schoolmates and a couple of dear friends have died, among them my first love. That’s certainly chucked a bucket of very cold water in Barbie’s youthful smiley face I can tell you, and accounted for a fair amount of the feelings of shrinkage. But I’m now also facing that old clichéé where time is speeding up. When you’re young the minutes pass like hours and there is a constant feeling of boredom because time stretches out to infinity. Now, I’ve got to that place the young can’t understand where the hours, days, weeks, months and years speed by like the counter in HG Wells’ Time Machine.

Time to carpe diem I say. Grab each day firmly by the throat and make it count. So much better than being subsumed in a myopic obsession about some much desired future state. Whether this state is a new job, a palatial home, a more exciting partner, a super-yacht, some publisher discovering you, winning a career changing award, the in vitro treatment delivering the longed-for and almost given up on baby, running away to live on an Ashram or joining the crew of the Sea Shepherd, putting everything else on hold until some new state arrives seems to be just plain dumb. Let’s face it, scenarios like the current Trump’s/Jong-un brinksmanship play merry Hell with all of our aspirations. But I’m still loving that it’s a gorgeous winter’s day and I’m free to sift through the Op-eds and indulge myself in writing this post. No fires to fight, no ferryman to pay. The future can go hang. I’m happy in my moment. After all, WTF can I do about the mine’s bigger than yours thing that’s going on between those two equally unappealing and childish so-called men?

The carpe diem aphorism comes from Book 1 of the Roman poet Horace’s work Odes written in 23 BC. Carpe diem has long been used as a standalone phrase which people like me think of in terms of living in the now. But the context from Horace is carpe diem, quam minimum credula poster — “Seize the day, put very little trust in tomorrow (the future)”. Horace’s point being we can’t see what the future will bring, but we should do everything we can today to stack the odds. Not to trust that everything will randomly fall into place.

When I thought about it, the gnarly problem of retirement planning sprang to mind. This is something of a sensitive topic for me at the moment as I’ve taken some significant risks with my financial future by treading the path of an entrepreneurial wannabe. The pot of gold at the end of this rainbow has yet to materialise and was looking frighteningly empty for a while. Putting all your financial eggs in the startup basket is a genius strategy if your name happens to be Bill Gates, but not so flash if you’re a John DeLorean and the expected high returns turn out to be little more than surf breaking on the rocks of hubris and self-delusion. While my investments are currently looking a bit healthier than they were a few months ago for a number of reasons, I still have anxiety dreams about becoming an ageing bag lady wheeling my few possessions round in a shopping trolley — pretty certain that the amount I’ve paid into my pension fund won’t cut it on it’s own.

In all likelihood, Horace’s contemporaries weren’t agonizing about whether their KiwiSaver contributions would see the distance. In those days, apparently if a baby made it through its first year, it could expect to live to the ripe old age of 34. Reaching your fifth year delivered the heady possibility of making relatively ‘old bones’ at 48. That’s a total of 17,520 diems to carpe if you want to get granular. Just as an aside, I wonder what went wrong between the Old Testament expectations of three score years and ten and Roman times? Must have been something to do with all that endless wandering around in the dessert as opposed to stagnating in the stews of Rome. Of course there’s also the thing about being God’s chosen people…

Anyway, in Ancient Rome, it’s thought that less than 5% of the population at any one time would be over 65. What a sensible arrangement!  All those lovely younger generations oozing tax denarii into the exchequer leaving no question about the state’s ability to provide for its aged and infirm. Not that Rome was exactly a trailblazer in the realm of social welfare, so this line of thinking is somewhat pointless. But the Roman equations are interesting in comparison to our ageing ‘Boomer’ reality, which is leaving many people angsting about their financial futures. The upside is that this is a temporary blip. Assuming that the militaristic fat boys step away from their nukes and stand down from the standoff, with the rate at which birth rates are levelling off of or falling in the west, we’ll be back to the healthy Roman proportions of youth to age before you can say “climate change is killing us”.

All joking aside, there’s a balance between living in the moment and leaving the future to chance. In the context of financial planning, for sure there are many variables such as how long we’ll live, how much money will be needed to achieve the twilight years lifestyle we aspire to and what environmental factors will kick in to derail it all, not to mention the whole Pandora’s Box of our health. But that doesn’t means there’s no point. Yay, this is where I get to use all those cliches like failing to plan is planning to fail (Alan Lakein after Churchill and Franklin).  Like, if one does not know to which port one is sailing, no wind is favourable (Seneca the Younger — and didn’t those ancient Greeks knew a thing or two BTW? Bet their life expectancy was higher than the Romans). Then there’s, it does not do to leave a live dragon out of your calculations if you live near him (Tolkien). For decades business gurus have been preaching the gospel of vision, mission and values as the foundation to success. Rightly so. Businesses are much more likely to achieve more, do better, make their shareholders wealthier, trade ethically etc. if they have some inkling of what they’re aiming for. It’s no different for us as individuals. Visualising what we want is much more likely to deliver than chasing a series of shiny new things down rabbit holes.

I used to have a friend who was obsessed with spontaneity. She didn’t like being tied into commitments or rules and regulations, preferring instead to live her life on ad hoc terms. We often used to argue a lot about this. Apart from anything else, it was deeply irritating that her need to be spontaneous resulted in her total inability to get anywhere on time. This fed my position which was that I don’t think you can actually be spontaneous unless you live within a structure from which you can break out. If spontaneity is your life mission it’s got to lead to chaos because nothing can ever be achieved. In a similar way, having no life plan invites chaos in. Seizing the day is not only  about visualising and working towards a desired future but also about enjoying the journey no matter what the outcome. As Robert Burns knew so well, “the best laid plans of mice and men gang aft agley.’ Pity to get to where they’ve gone agley and there’s only disappointment and a black hole which sucked in time passed in waiting. The best bit is that with a vision, the whole concept of retirement planning becomes moot because we already know which port we’re sailing to. That we want our days to end in a Disney Castle or an Indian ashram or somewhere in between. Clearly circumstances do frequently rain on this planning parade, requiring regular recalibration, but to me that offers better odds than relying on a Lotto win.

In terms of feeling that my life is shrinking before my eyes, I’m determined to make better use this precious and diminishing time resource that once seemed a commodity. Stop bleeding out on things that don’t matter. Letting time slip away like Dali’s Melting Watch in the featured image. For sure, I need to do what it takes to get some decent returns from all the time I’ve invested in my businesses so the ageing bag lady scenario remains simply a bad dream. But I’m visualising as I write and my scenario always includes enough money to see me out in style and allow me to do all the other things I have factored in.

In this vision, when the bell tolls for me, I plan for it to interrupt something amazing. To continue the annoying references, I will be living my days rather than counting my years. Go to India and Antarctica. Take the sentimental journey home to Scotland and write my memoirs en route. Get therapy for the rampaging arachnophobia that makes any attempt at gardening feel like a journey to Mount Doom! Actually turn up at my orchestra having done more than one cursory run through of the music. Or better, stop beating myself up if I don’t! You get the picture I’m sure? Carpe diem indeed!